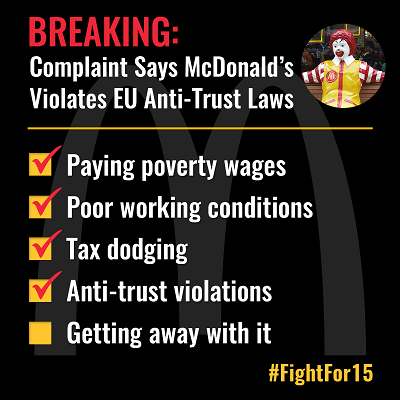 Today, a coalition of Italian consumer groups announced it has lodged a formal antitrust complaint with the European Commission, alleging McDonald’s abuses its dominant fast-food market position in Europe, restricting consumer choice and leading to higher prices and poorer quality of service and food. If found guilty, the company could face severe penalties of up to €2.5 billion.

The move is the latest challenge to McDonald’s global business model. Poverty wages, poor working conditions, and aggressive tax avoidance have all featured for too long on McDonald’s menu and have triggered government actions, from the US to Brazil and, most recently, Europe. The filing comes just weeks after the European Commission launched a formal state-aid investigation into McDonald’s tax arrangements with Luxembourg based on an assessment that its Luxembourg-based subsidiary McDonald’s Europe Franchising has paid virtually no corporate tax either in Luxembourg or in the US since 2009.

To coincide with the filing of the antitrust complaint and the petition on working conditions, two-dozen U.S. McDonald’s workers are traveling to Europe this week to meet with politicians in six countries. They plan to discuss their involvement in the Fight for $15 as well as the importance of holding McDonald’s, the world’s No. 2 private employer, accountable to workers, consumers, and taxpayers.