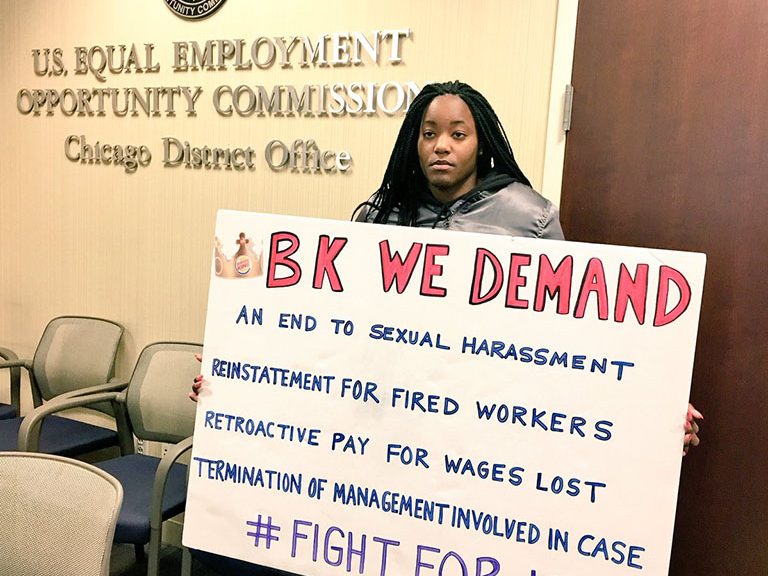 Workers at Burger King have experienced physical and verbal abuse along with intimidation from general management at several locations owned by the same franchisee.

One underaged woman was fired for not consenting to specific sexual requests.

Another woman reports that her manager repeatedly grabbed her from behind.

A third says he regularly tried to kiss her – and would make her listen to stories about his sex life with his wife.

And a fourth reports that he once took her hand and placed it on his crotch in the back office.

The workers’ demands emphasize reinstatement for harassed employees who were fired, retroactive pay for wages lost during unemployment, and termination of management who was involved in the complaints.

On International Working Women’s Day, fast-food workers joined with community allies to protest Burger King in Chicago to demand an end to the rampant sexual harassment and workplace violence.

Approximately two-thirds of fast food workers are women. Many of them report being verbally and physically abused. According to a national survey released by Hart Research and Futures Without Violence, the National Partnership for Women & Children, and the Ms. Foundation for Women, two in five female fast-food workers across the country have been sexually harassed on the job.

The primary reason fast-food workers are fighting for union rights is so that they can have their own organization to protect themselves and to stand up to workplace issues like sexual harassment.

We won’t let these women stand alone. Join the Fight for $15 to tell Burger King that sexual harassment is COMPLETELY unacceptable.