California workers rise up for unions 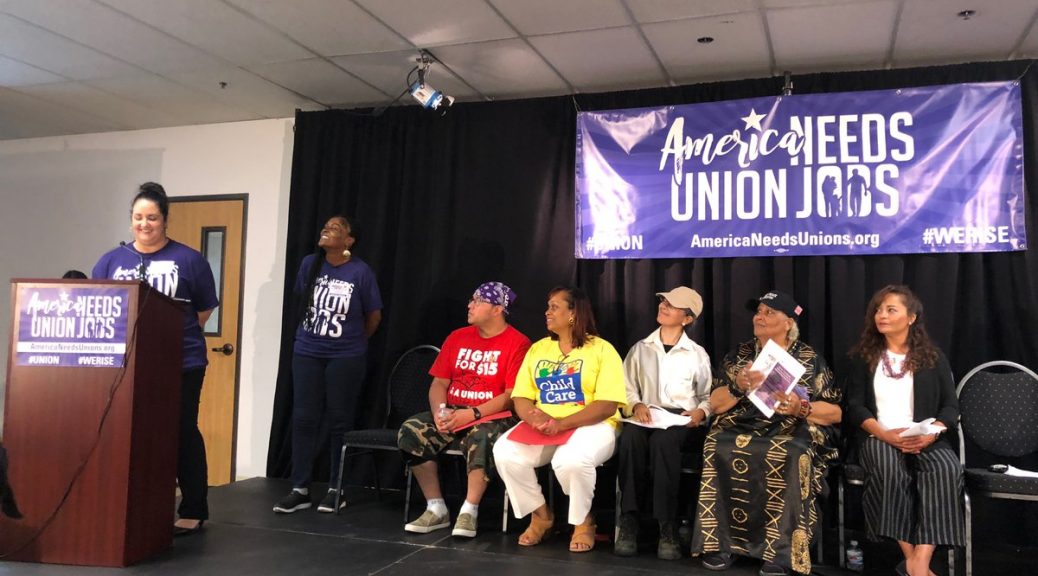 Childcare workers, fast-food workers, home healthcare workers and others from more than a dozen unions and organizations were joined by elected officials at an America Needs Unions town hall Saturday in San Jose, California. In the face of growing attacks on working families, they demanded a brighter future through stronger worker protections and more folks in unions.

Rich corporations create homelessness by paying too little to afford skyrocketing California rents — and then turn around and banish homeless folks from their lobbies and parking lots.

"We need unions. I'm here to talk for all the working poor, who live in their vans, and who are part of homeless encampments. We're told to keep the homeless out of the parking lots,out of the lobbies, but we're homeless ourselves." Elizabeth, @seiuusww member #FightFor15 #union pic.twitter.com/nk8WhEPvKx

California elected officials spoke clearly about the benefits of unions, and we agree with Rep. Ro Khanna, “We have to actually build unions in this country!”

.@RepRoKhanna "People try to put union workers vs nonunion workers. #Union workers make 27% more. That's a fact. When you raise wages it lifts all boats. We have to actually build unions in this country" #FightFor15 pic.twitter.com/pb3aqQlPSP

Rep. Zoe Lofgren spoke on the legacy of union activism in her family, and the need for a renewed commitment to organizing. “This is a long fight” she said, but we aren’t going to back down now.

.@RepZoeLofgren cites that her parents and grandparents were union activists. "We had a legal framework that allowed for workers to join unions… our ability to counter the right is in the ability of the American voters. This is a long fight" pic.twitter.com/cy1xDng99V

California State Assembly Member Ash Kalra made it clear. We need more workers in unions. That’s what politicians should be fighting for.

.@Ash_Kalra "To the question of should people have more unions. Yes. It's easy to answer because of the reality we're in. We have to send a message to our neighbors and coworkers. Sometimes that's uncomfortable. We can't be silent anymore." #FightFor15 #union pic.twitter.com/moG5bPlrAm

He closed his remarks calling for the movement to keep “hope in our hearts” and “show the world how to stand up for workers.”

"We have to have hope in our hearts. They can come after us, but they can't come after our movement. We need to give the U.S. legis the support they need, but there's a lot of work to do in California and we can show the world how to stand up for workers." @Ash_Kalra #FightFor15 pic.twitter.com/WDI5ocbc74

Or watch the 5 minute recap here: