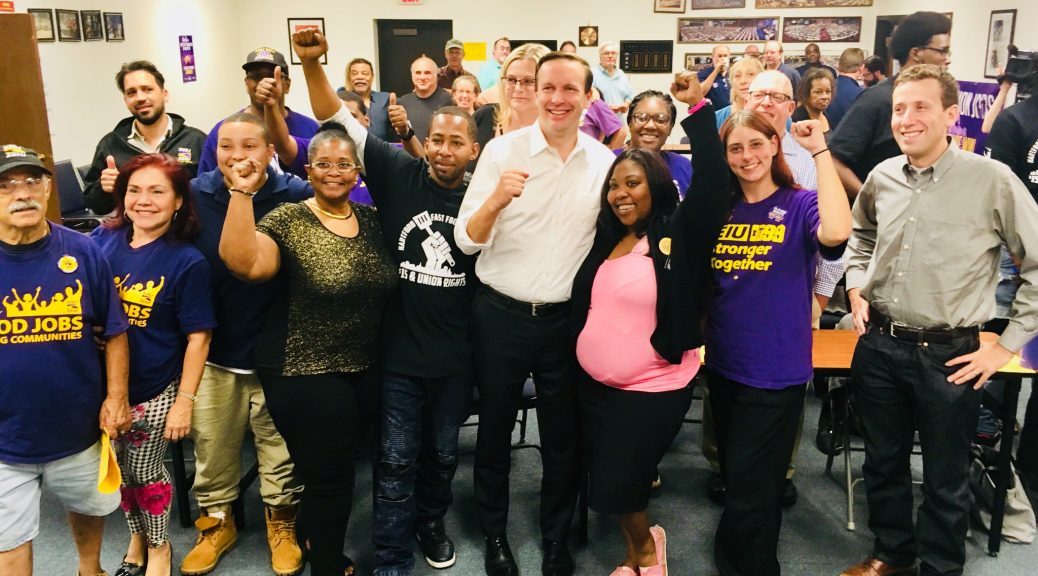 This weekend, passionate workers and union members spoke with US Senator Chris Murphy about living wages, the right to organize, and the need for more Americans to be in unions at the final America Needs Unions Town Hall in Connecticut.

Angel Candeario, the MC, kicked things off by reminding us all of the lasting impact of this fight. “If it doesn’t affect you today, it’s going to affect your children and grandchildren.”

Today in Connecticut, union members, workers in the #FightFor15, and the people of CT took part in the America Needs Unions Town Hall series with @ChrisMurphyCT to talk about how we need more workers in unions across the U.S. #FightFor15 #union pic.twitter.com/PIBRybjjtC

Richard, a worker at Burger King who makes just $10.25 an hour, shared how hard it is to take care of himself and his medical expenses while making so little — and that’s where a union could help.

"I make $10.10 an hour at McDonalds. Without insurance my inhaler costs $75.00. My very life depends on it. I struggle to get the things I need, including my medication." Richard, fast food worker @SEIU Labor Forum #FightFor15 #LivingWage pic.twitter.com/uYDgtsC2OY

Kara shared similar struggles on trying to make ends meet on such low pay. “I’ve worked at least two jobs for as long as I can remember. We’re one injury, one sick day, one car breakdown away from devastation.”

"It's a struggle every day to make ends meet. I've worked at least two jobs for as long as I can remember. We're one injury, one sick day, one car breakdown away from devastation." @SEIU Labor Forum #TogetherWeRise #UnionVoicesMatter @ChrisMurphyCT pic.twitter.com/FDHMMdtW7L

And when Senator Murphy took the mic, he spoke in solidarity with these workers in the fight for a fair wage and the right to organize, and shared how he believes we can start to fix the system. “It’s not a coincidence that as union membership goes down, the separation between the rich and poor gets bigger and bigger.”

"I'm a supporter of the #FightFor15. It makes sense to have a national floor that recognizes the amount of money that people need in order to live" –@ChrisMurphyCT standing in support of higher pay at the American Needs Unions Town Hall in Connecticut today! #union pic.twitter.com/q90UmGNvMy

"If you get the signatures of half the people who work in a place of business they should be able to form a union … hold companies more accountable." – @ChrisMurphyCT at the America Needs Unions Town Hall in Connecticut. #FightFor15 #union pic.twitter.com/QEqsq62ugY