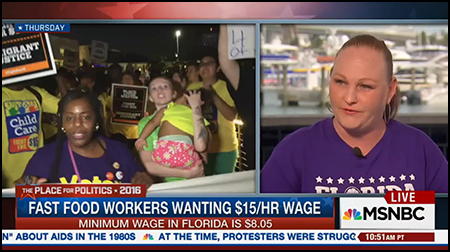 Hundreds of child care, fast food, and home care workers were out in force in Florida, calling for better pay NOW. Fast food worker Marianna Raney was featured on MSNBC talking about how hard it can be to get by on minimum wage, and why she and her fellow workers were taking to the streets:

“You can’t survive out here on $8.50 or $9.00 an hour. By the time you get done paying child care and all of your bills, you have no money left over. I struggle from paycheck to paycheck. I’ll pay the minimum on the light bill. The minimum on the water bill. It’s a struggle.”

The minimum wage in Florida is just $8.50 an hour, and workers from across the state are asking for Florida to follow the lead of states and cities across the country that have raised their minimum wages substantially. Right now workers have to burn the candle at both ends to make enough to pay the bills, and still find time to spend with their families.

“We’re the ones who are doing all the hard work, putting in the hours every day, busting our butts, and we don’t get nothing for it,” added Marianna.

She said that she’ll be voting in the election for “anyone that’s going to stand behind me and what I believe in — the Fight for $15.”