From coast to coast, the #Fightfor15 is WINNING! 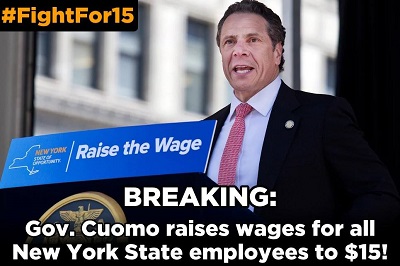 Underpaid workers on both coasts won major pay raises to $15/hour this month:

Milwaukie, OR – The City Council in Milwaukie, Ore., unanimously approved a pay raise for all city workers to $15/hour.

Pittsburgh, PA – Mayor Bill Peduto issued an executive order that will require city employees to be paid at least $15 an hour and a call for legislation requiring city contractors to pay the same minimum wages.

Syracuse, NY – Mayor Stephanie Miner announced that she is raising wages for all city workers to $15/hour, effective immediately.

Albany, NY – Gov. Andrew M. Cuomo announced that he would establish a $15 minimum wage for all state workers, making New York the first state to set such a high wage for its public employees.

We are winning. Keep up the pressure on elected officials: Sign the Fight for $15 voter pledge today >>