Huge Fight for $15 protest at the McDonald’s shareholder meeting 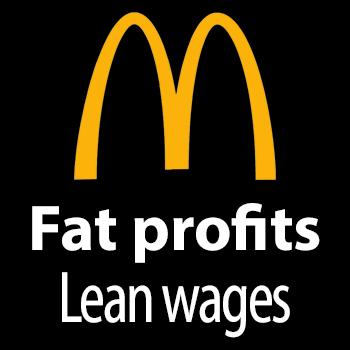 McDonald’s profits keep growing while their workers struggle — so 10,000 workers with the Fight for $15 are making it clear to McDonald’s leaders: the time is NOW for higher pay. People who work full time should NEVER have to rely on food stamps to feed themselves and their families.

It’s wrong  for a company whose stock just hit an all-time high to pay wages so low that its workers have to rely on public assistance to scrape by. McDonald’s profits in the first quarter rose 35% — it’s time for the company to share its good fortune with its workers.

“McDonald’s sales are going through the roof, but my children have to live with their grandparents because I can’t afford to keep a roof over our heads as long as my paycheck is stuck at minimum wage,” said George McCray, a McDonald’s worker from Chicago, Ill., who is paid Illinois’ minimum of $8.25/hour. “We’ve been working hard to make new changes like the All-Day Breakfast a success and have helped make the company billions, but our wages haven’t budged. How much longer will McDonald’s workers have to wait before the company’s success benefits us too?”

“This isn’t just about fast-food workers or McDonald’s workers – McWages are holding us all back,” said Vicki Treadwell, a Milwaukee home care worker who is paid just $10.75/hour after 25 years on the job. “As long as McDonald’s fails to pay fair wages and rips off taxpayers, moms like me will have to turn to food pantries to feed our families. With its record profits, McDonald’s can choose to lift up all workers and the economy.”

You can join the protest online too!