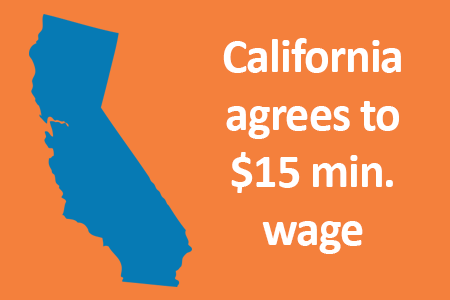 Wow. This is our biggest victory to date — and it’s huge. California is set to become the first state in America with a $15 minimum wage. Now 6.5 million workers are getting raises because of the work that we have ALL been doing. And there’s no way this slows down.

Cities and states across the country are pushing to get their wages up. Workers need $15 to get by, and politicians and businesses are getting in line.

Cities including Seattle, San Francisco, and Los Angeles have raised their minimum wage to $15/hr. And home care workers in Massachusetts and Oregon won $15/hr statewide minimum wages. Companies including Facebook, Aetna, Amalgamated Bank, and Nationwide Insurance have raised pay to $15/hr or higher; workers in nursing homes, public schools and hospitals have won $15/hr via collective bargaining; and fast-food workers have ratcheted up pressure on companies like McDonald’s to raise pay to $15/hr.