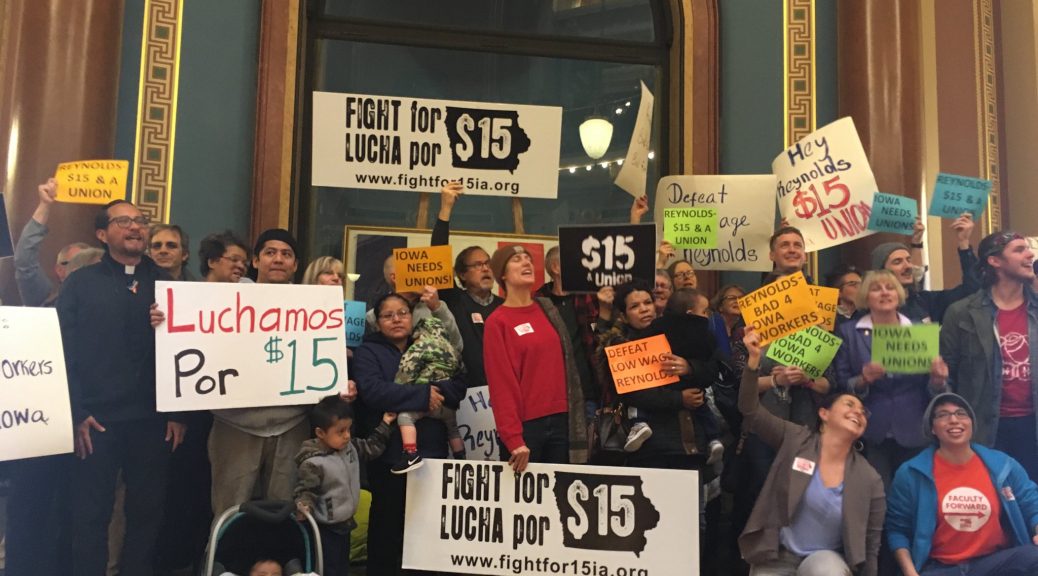 Fed up with Gov. Kim Reynolds’ attacks on working people and their unions, local fast-food and hospital workers in the Fight for $15 took over the Iowa statehouse to protest during the governor’s Condition of the State address, stressing their commitment to defeating Reynolds.

Gov. Reynolds and Republican state lawmakers have waged a string of attacks on workers’ unions in recent years. Last February, then-Gov. Terry Branstad signed into law a bill endorsed by then-Lt. Gov. Kim Reynolds curbing collective bargaining rights for thousands of public sector workers in the state. The law strips workers of the right to bargain over healthcare and other benefits and forces workers to recertify their union before each bargaining session. In March, Branstad signed into law a bill passed by the Republican legislature blocking all localities from raising their minimum wage, nullifying local wage increases that had been passed in Polk, Johnson, Linn and Wapello Counties.

#FightFor15 Workers won’t back down from this fight or any other, and we plan on keeping the pressure on in 2018 and beyond. Get involved in the fight in 2018 by signing up to volunteer 40 hours before the election. Join the 40 for 15 Today!