“McDonald’s can easily afford to give us a raise” 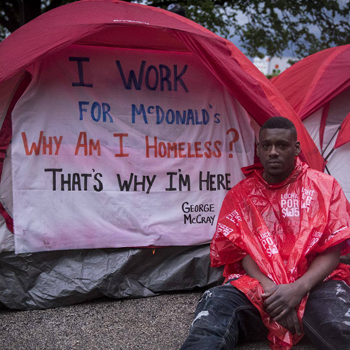 “I never thought I’d go on strike and march against my employer — much less sleep in a tent outside company headquarters. But I’m doing it because I simply can’t make ends meet, even though I work hard. I get paid just $8.25 per hour. That’s so low that the only bill I can pay is my phone bill, and I’m forced to turn to food stamps to eat.”

That’s George McCray, he was among the 10,000 people that hit the streets with the Fight for $15, protesting and camping outside of McDonald’s HQ — all to send a message: We’ve won $15 an hour in cities and states across the country and it’s beyond time for McDonald’s to shape up and do right by its workers.

The Fight for $15 is fueled by folks who are standing up for what’s right, many who have never voted or been to a protest in their lives. This movement is empowering people in a way they never have been before. And we will keep fighting and keep winning.

Home care, child care, fast-food, airport, and university workers all came together to stand up for $15 an hour and union rights for all workers in Chicago and across the US. because McJobs cost us all ($153 Billion of taxpayer money each year, to be precise). It’s time for McDonald’s to actually pay a living wage – and stop letting others foot the bill for their profits.

As George McCray added, “McDonald’s can easily afford to give us a raise. While it pays workers lean wages, it makes fat profits of billions of dollars each year. It made more than $1 billion in the first three months of the year and its stock recently hit an all-time high.”