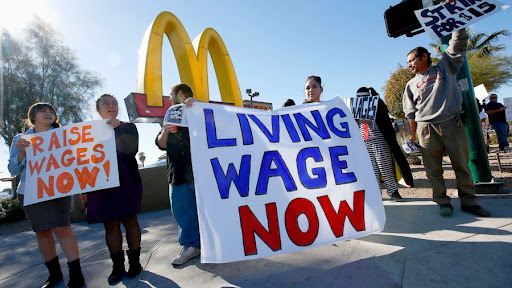 McDonald’s executives and investors counted their billions in profits and dividends at their annual shareholder’s meeting. We counted the number of strikes.

We are DONE with McDonald’s poverty wages, threats about immigration status, unpaid sick or vacation days, and wage theft. So far this year, McDonald’s profits are up nearly 12%. Their CEO got paid $20 million, and he told his investors that the “arches have shown brightly.”

We know the truth: McDonald’s makes their money off the backs of exploited workers. And they still refuse to take accountability for widespread sexual harassment, racial discrimination, violence towards workers, and union-busting.

Workers are fighting for their rights: for a livable wage and for the right to a union that will protect them. For dignity. For respect. Share in solidarity with workers demanding better >>