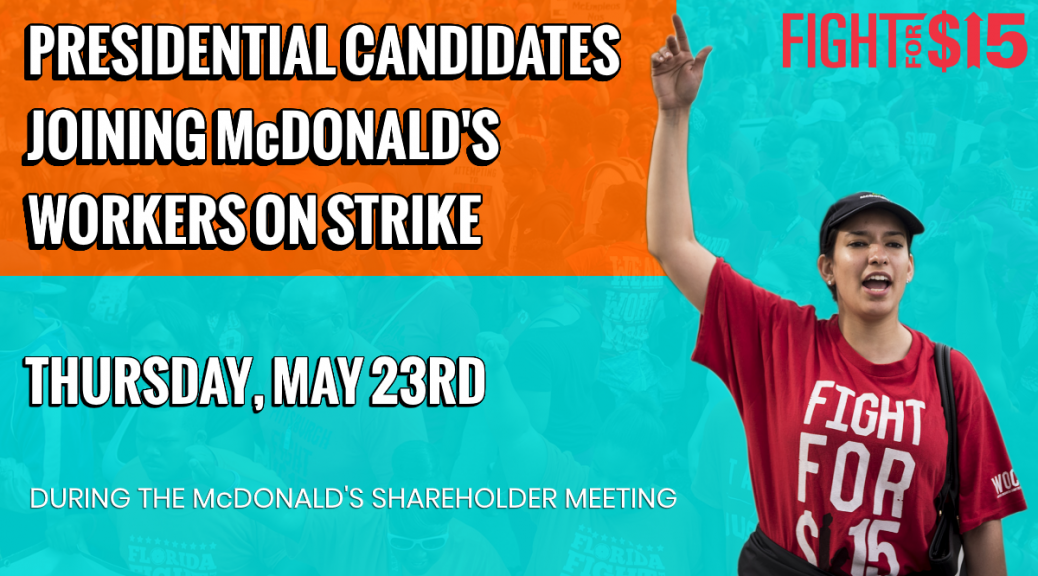 As reported by the Associated Press, McDonald’s workers in the Fight for $15 and a Union movement are going on strike Thursday, May 23.

Bernie Sanders will host a video town hall with McDonald’s workers protesting outside the company’s shareholder meeting.”If Amazon can raise their minimum wage to $15 an hour there is no reason that McDonalds, a company that took in $1.4 billion in profit and paid its CEO $22 million, can’t pay its workers a living wage,” he said. “I am proud to stand with workers demanding $15 an hour and a union.”

“I’m proud to join the Fight for $15 and McDonald’s employees from across the country to stand up for worker’s rights and ensure they have a seat at the table to negotiate,” said Former Secretary of Housing & Urban Development Julian Castro.

Washington Governor Jay Inslee, expected to join workers in Chicago added, “every worker in every community deserves a minimum wage of at least $15 per hour.”

“Big corporations like McDonald’s make it harder for people to get ahead by driving down workers’ wages and undermining their ability to organize,” said Senator Cory Booker. “I’m proud to stand in solidarity with my brothers and sisters in their pursuit of a fair wage, their right to unionize, and access to a safe work environment.”

Keep updated on the upcoming strike and DEMAND a $15 minimum wage at McDonald’s and union rights.