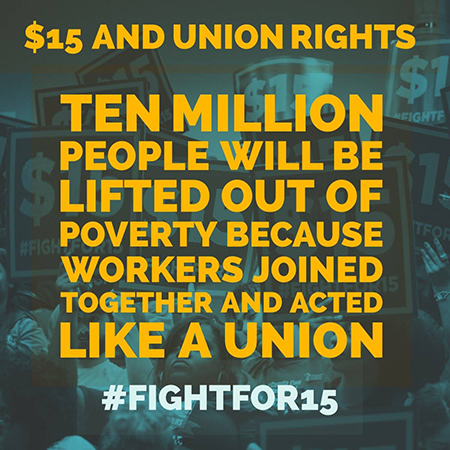 Days after 6.5 million Californians and thousands of hospital workers in Pennsylvania won $15/hr, millions of workers in New York—where the Fight for $15 began— joined the $15/hr club Thursday, capping a HISTORIC week in which more than 10 million janitors, fast-food cashiers, and home care workers secured unprecedented raises from coast to coast.

“California! New York! Pittsburgh! Fifteen dollars an hour is catching on everywhere,” declared Jorel Ware, a McDonald’s worker from New York City and member of the Fight for $15. “When we first went on strike in New York in 2012, people said we had no chance, but we are showing the whole country that when workers stick together, there’s no such thing as impossible.”

New York workers’ win comes as politicians across the country are racing to respond to workers’ demands for $15/hr. In addition to the agreement announced this week by California Gov. Jerry Brown, Cincinnati Mayor John Cranley said Tuesday he wants to raise pay for city workers to $15; Washington, DC Mayor Muriel Bowser last week unveiled a plan to raise pay to $15/hr by 2020; and New Jersey Senate President Stephen Sweeney said he will put a $15/hr on the ballot in 2017. Columbia University also said this week that it was raising pay for student workers to $15.

“The historic raises won by workers in New York and California this week show that our movement is unstoppable,” said Adrianna Alvarez, a McDonald’s worker in Chicago and member of the Fight for $15. “Workers are joining together and demanding change, and for the first time in a long time, we are winning. We’re going to keep fighting until the demands first made by workers in New York City—$15 and union rights—are met not just in New York and California, but everywhere.”

Keep moving the fight FORWARD. Join the Fight for $15 on April 14th for our biggest-ever strikes and protests for $15 EVERYWHERE >>