On Labor Day, Gov. Newsom Signs Landmark Bill to Give Voice to More Than Half Million Fast-food Workers 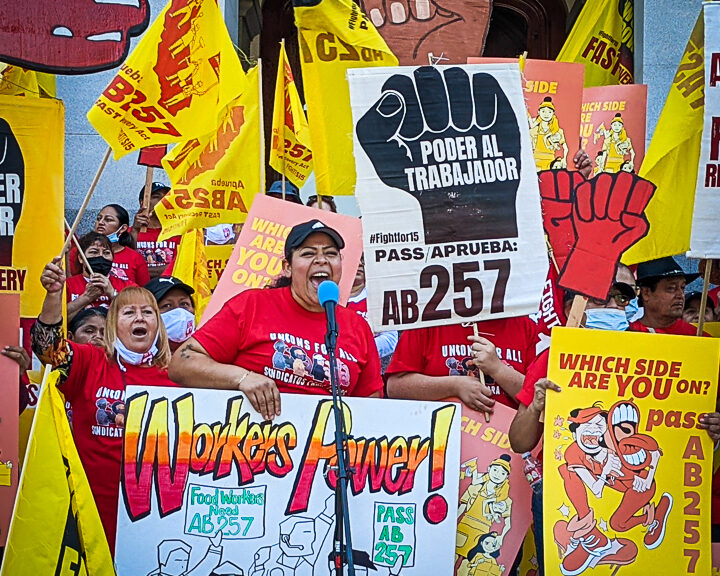 SACRAMENTO — Gov. Gavin Newsom on Monday signed AB 257, the FAST Recovery Act, marking an historic victory in fast-food workers’ decade-long fight for fair pay and a voice on the job. AB 257 protects and empowers California’s 550,000 fast-food workforce with a seat at the table to help set minimum industry standards around wages, safety and training.

With Gov. Newsom’s signature, the historic measure is law despite fierce lobbying from burger giant McDonald’s, which led a fast-food industry push in a failed attempt to deny more than half a million workers — the vast majority of them Black and Latino — a seat at the table.

“Governor Newsom’s signature on AB 257 makes this Labor Day an historic one and shows what’s possible when working people unite and raise our voices,” said Anneisha Williams, a Los Angeles fast-food worker and leader in the Fight for $15 and a Union. “We’ve gone on strike, marched in the streets and rallied across the state to make sure our demand for a voice on the job was heard even as powerful corporations pulled out all the stops to silence us. We look forward to having a say in creating safe and healthy workplaces across the fast-food industry and to AB 257 serving as a model for workers across the country who desperately need a seat at the table.”

In their years long fight to win a voice on the job through AB 257, California fast-food workers waged more than 350 strikes and filed nearly 300 health, safety and wage complaints with local and state agencies, painting a stark picture of an industry in crisis and compelling lawmakers to take action.

AB 257 seeks to improve conditions for fast-food workers by guaranteeing them a seat at the table on a Fast Food Council along with regulatory agencies, fast-food franchisees and fast-food corporations to help shape minimum standards on wages, working hours, training, health and safety, and other working conditions including security in the workplace, the right to take time off work for protected purposes and the right to be free from discrimination and harassment in the workplace.

“AB 257 creates minimum standards for wages and work conditions, protects workers from being fired for organizing and establishes sectoral organizing with a fast food worker council,” said Assemblyman Chris Holden (D-Pasadena), the author of the legislation and a former fast-food franchisee.  “I’m proud to have ushered an inclusive approach to the industry by giving employees the chance to be included in a process that has always impacted them.”

The passage of AB 257 marks a watershed moment in the nation’s labor history, giving more than half a million low-wage workers in the fast-food industry a meaningful voice on the job. The victory comes almost 10 years after fast-food workers launched the Fight for $15 and a Union movement, transforming the national conversation around wages and workers’ right to have a say in their own working conditions.

In 2016, California became the first state in the nation to pass a $15/hr minimum wage, a move that has now been replicated in 10 other states and Washington, D.C. With the passage of AB 257, California has made history once again.

“Ten years after 200 fast-food workers walked off the job in New York City and galvanized an international movement of workers demanding $15/hr and union rights, the passage of AB 257 is the most significant advance in workers’ fight for fairness on the job in a generation,” said Mary Kay Henry, President of the Service Employees International Union. “Workers from coast to coast are stepping into their power, and they’ll take their fight to any company in any industry. It’s time for corporations like McDonald’s, Amazon, Starbucks and Delta to come to a national bargaining table to raise standards across their industries and ensure every worker is respected, protected and paid a living wage.”

AB 257 will empower workers to develop solutions to long-standing issues in the fast-food industry by:

As California faces a persistent crisis of racial and economic inequality, AB 257 represents an opportunity for workers, employers and state officials to come together to help communities across the state address the rising cost of living and improve health and safety conditions on the job.

A recent study conducted by Harvard and the University of California San Francisco found that the state’s fast-food workers are paid $3/hr less than comparable service-sector workers and face relatively higher levels of schedule instability. They are more than twice as likely to live in poverty than other workers, and more likely to rely on public assistance. In a recent survey, an astonishing 85% of respondents reported experiencing wage theft while working in fast-food.

“The passage of AB 257 is a crucial step forward to addressing California’s ongoing crises of racial and economic inequality, a task that has only grow more urgent with the rising cost of living,” said David Huerta, President of the SEIU California State Council and SEIU-USWW. “Workers in this industry face systemic issues such as low pay, health and safety, wage theft and more, and the only way to address them is to give cooks and cashiers a real seat at the table with their employers.”

Members of California’s delegation in the U.S. House of Representatives have also stood with fast-food workers in their fight for AB 257. In a letter sent to Gov. Newsom and state legislative leaders in early August, Reps. Ro Khanna, Barbara Lee, Karen Bass and five other members of the California delegation emphasized the impact AB 257 will have on disadvantaged communities across the state.

“Investing in organizing models like AB 257 – that include workers in the decision-making process – is key to addressing rising income inequality, increasing the country’s labor participation rate, and getting Americans back to work nationwide,” the members of Congress wrote.