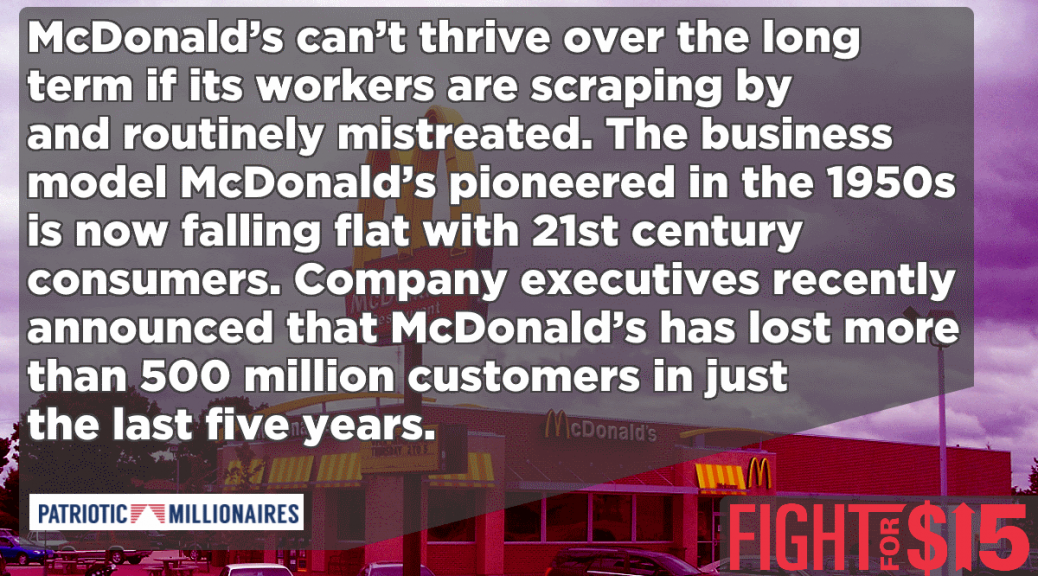 Patriotic Millionaires, a group of investor-class leaders and advocates who fight for fair wages, fair taxes, and fair representation for all Americans, delivered an open letter to McDonald’s today on the eve of the company’s shareholder meeting.

As explained by Business Insider, the letter was signed by the Chairman of Patriotic Millionaires Morris Pearl, a former executive of asset management firm BlackStone, who takes McDonald’s to task.

“McDonald’s can’t thrive over the long term if its workers are scraping by and routinely mistreated,” the letter reads. “The business model McDonald’s pioneered in the 1950s is now falling flat with 21st century consumers. Company executives recently announced that McDonald’s has lost more than 500 million customers in just the last five years.”

Last week, Patriotic Millionaires announced it would join the minimum wage activist group Fight for $15 for a “March on McDonald’s” this Tuesday, the day before the fast-food giant’s annual shareholder meeting. The protest, which will kick off outside of Trump Tower in Chicago, will be a public demand for the company to pay all workers $15 and provide union rights.

We’re proud to have the support of the Patriotic Millionaires as we take a stand against the bottom-of-the-barrel business practices pushed by McDonald’s that continue to hold all workers down.

"McDonald's can't thrive over the long term if its workers are scraping by and routinely mistreated." #FightFor15 https://t.co/sCutMdIF3b