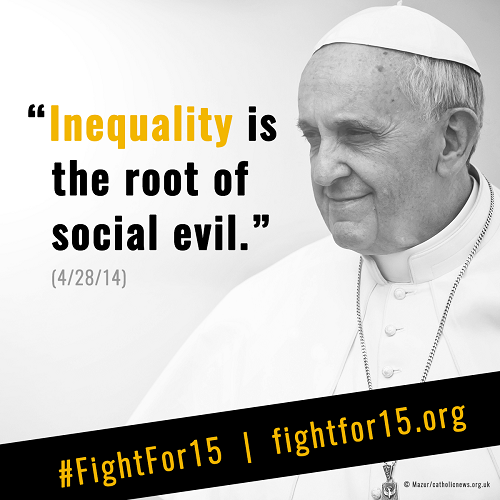 As Pope Francis began his first US visit Wednesday, he was greeted by child care, home care, and fast-food workers who are part of the Fight for $15.
Adriana Alvarez, McDonald’s worker and Fight for $15 leader, noted the similarities between the Fight for $15 and the Pope’s teachings: “The Fight for $15 is about justice for millions of working people who are denied the basic wages needed to sustain a family. When the Pope says, ‘Please, let us fight for this: the justice of work,’ I feel like he is speaking directly to me, and to my brothers and sisters who have been on the front lines of the fight to raise wages.”
Antoinette Quintyne, a home care worker from Miami, believes that Pope Francis understands home care workers and sees him as an inspiration. “When I think about the future, it always involves the opportunity to stand up and say what I think is right and what I think is wrong. No one should work as hard as I do and still be poor. I struggle every month to make ends meet and I am not alone. There are millions of women: single mothers, immigrant women, women of color and professional healthcare workers leaving in poverty working full-time jobs. This is wrong. We should have a living wage that allows working people to be able to step up out of poverty, afford a day off and take care of their kids and loved ones. This is the right thing to do.”
Facebook Widget
Twitter Widget
Favorite Tweets by @fightfor15