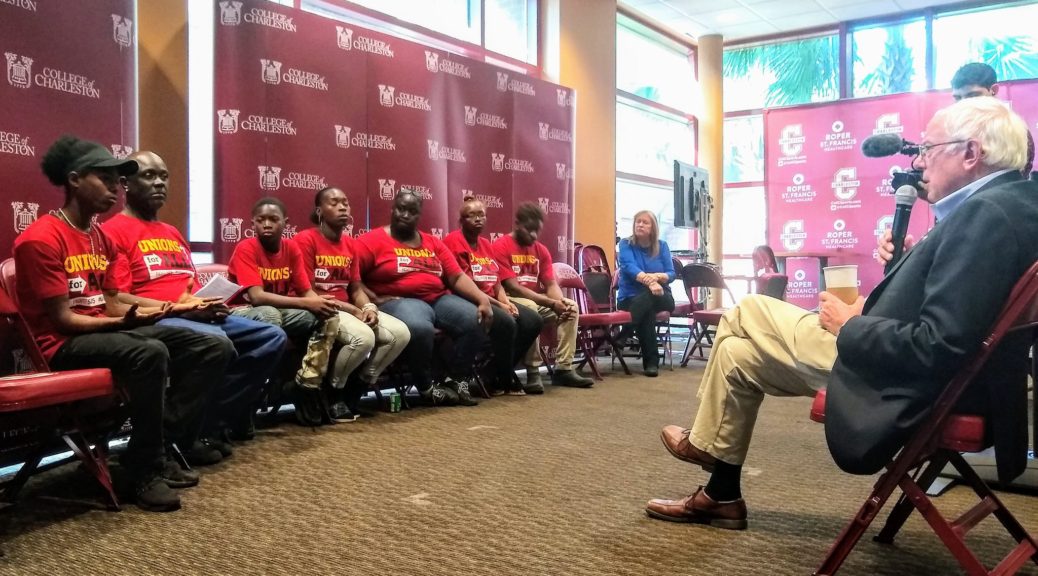 Today in South Carolina, #FightFor15 workers met with Senator @BernieSanders. Here, he brought up the need for all @McDonalds workers to make at least $15 an hour. pic.twitter.com/OM9HndK014

Senator Sanders specifically referenced the power of the Fight for $15 movement, saying “These guys have had enormous success. As of today, seven states and the U.S. House of Representatives have raised the minimum wage to $15 bucks an hour!”

He was also critical of the fact that “workers in this country are earning starvation wages” and expressed the need for all McDonald’s workers to make at least $15 an hour.

.@BernieSanders: “Because of what you do in the #FightFor15, millions of workers are already getting higher wages across the country.” We are fighting, and we will win. #UnionsForAll pic.twitter.com/sF27eJCQil

The Senator invited two Fight for $15 members on stage with him to discuss why they joined the #Fightfor15 and a union. Hezzy, a McDonald’s worker from South Carolina, spoke specifically about how union rights could help the fight against sexual harassment on the job, which he sees as a huge problem.

Last Sunday, Hezzy and Tina stood on stage with Sen. @BernieSanders to talk about why he joined the #FightFor15 and union rights. He’s fighting rampant sexual harassment on the job.

Another reason we’re fighting to win #UnionsForAll – it’s time for candidates to get on board! pic.twitter.com/jSSGL9hyTb

In a country where three people own more wealth than the bottom half of American society, we need all candidates to commit to policies like raising the minimum wage and getting more workers in unions.

#FightFor15 worker-leaders are about to meet with @BernieSanders in Charleston, SC to talk about union rights, $15/hr and so much more. We’re making change in the South and across the country thru worker power! #UnionsForAll pic.twitter.com/mdu3QJYFmg

Candidates will need the support of workers to power their victory. Join us and tell every presidential candidate to support our platform for Unions for All!