Solidarity with Starbucks Workers Fighting for their Union! 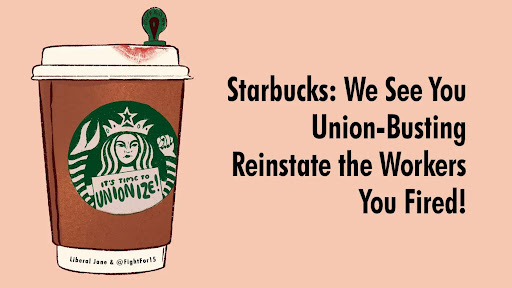 Collective action is brewing across the country. Starbucks workers in more than 100 stores have filed to unionize with one message: every worker deserves justice, equality, and a better life.

Corporations get greedy and workers are uniting to reclaim our power. Starbucks is using the same union-busting playbook seen at McDonald’s, Amazon, and countless other “progressive” corporations. Rather than raise wages, they’ve spent MILLIONS to crack down on worker organizing. They’ve even fired union organizers in Memphis in an apparent attempt to intimidate workers. Tell Starbucks to stop union busting!

Sleazy tactics won’t divide our fight for dignity and respect on the job. It’s obvious that executives at Starbucks are getting desperate, and they’re swarming stores to try to stop workers from organizing. But the joke’s on them – workers won’t back down. Sign now in support of Starbucks workers >>