Tens of Thousands to Strike and Protest: ‘The Fight for $15 Won’t Back Down!’ 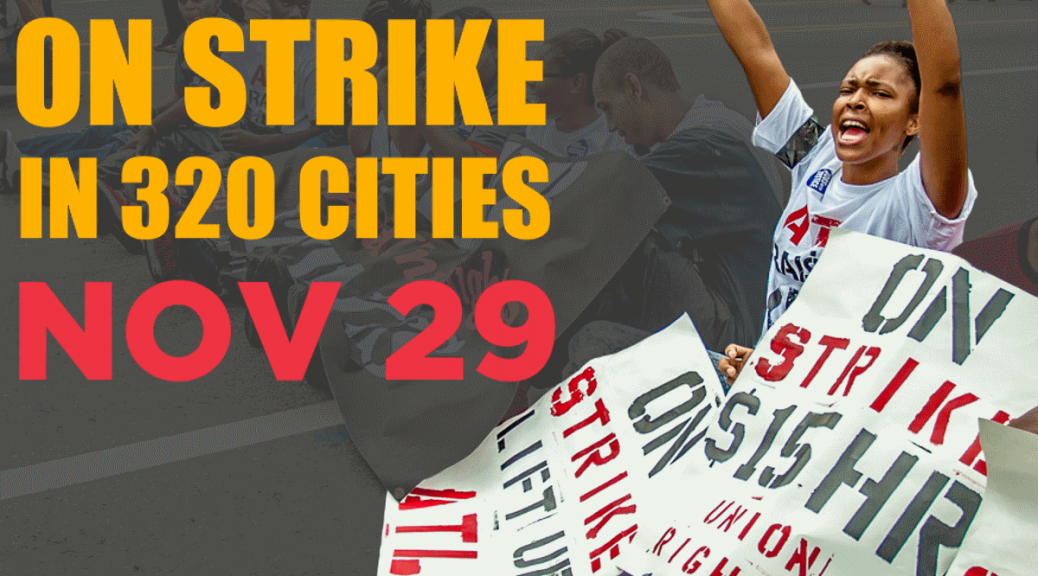 Newly-elected politicians and newly-empowered corporate special interests are pushing an extremist agenda to move the country to the right — That’s why we’re taking to the streets on November 29th — our four-year-old Fight for $15 will not back down! Any efforts to block wage increases, gut workers’ rights or healthcare, deport immigrants, or support racism or racist policies, will be met with UNRELENTING OPPOSITION.

We are going to hit hard — pushing our most disruptive protests yet on Nov. 29. We’re expanding our movement to nearly 20 airports serving 2 million passengers a day, and risking arrest via mass civil disobedience in front of McDonald’s restaurants from Detroit to Denver.

Our movement of workers spans the whole economy—including baggage handlers, fast-food cooks, home care workers, child care teachers and graduate assistants— and we will DEMAND $15 and union rights, no deportations, an end to the police killings of black people, and politicians keep their hands off Americans’ health care coverage.

“Americans are united around our desire for a better future for our kids and an economy that works for everyone, not just those at the top,” shared Betty Douglas, a McDonald’s worker from St. Louis, Mo. who is paid just $7.90 an hour after eight years on the job and who plans to strike for $15 and union rights on Nov. 29. “We are also protesting to reject the politics of divisiveness that tears America apart by race, religion, ethnicity and gender. And we won’t back down until the economy is fixed for all workers and we win justice for all people in our nation.”

JOIN THE FIGHT ON NOVEMBER 29. SIGN UP HERE NOW >>