The Fight for $15 and a Union brings the fight to McDonald’s annual shareholder’s meeting – and beyond. 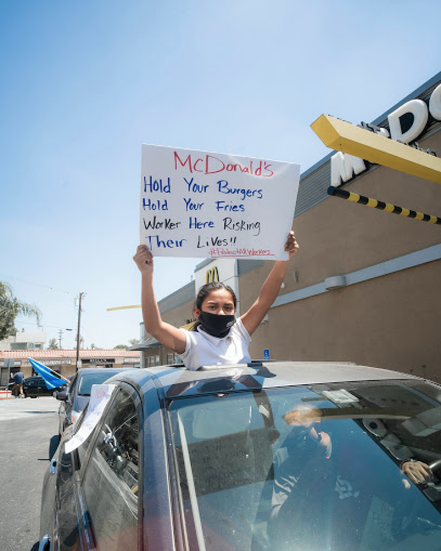 McDonald’s SILENCED their own worker on their annual shareholder’s call. But they can’t silence the movement for $15/hr and union rights.

“In your restaurants, right this minute, workers are getting sick from COVID-19,” Terrence Wise, a Fight for $15 leader, told shareholders. “We deserve $15 and a Union!” At that point, the Chairman of the Board muted his line.

McDonald’s is putting our lives on the line and they don’t even have the respect to hear what it’s like in their stores. Coronavirus is killing people in Black and Brown communities at higher rates – and instead of listening to us about the problem, they SILENCE us. Demand McDonald’s #ProtectAllWorkers.

BREAKING: @McDonalds SILENCED Terrence Wise, a #FightFor15 leader and McDonald's worker from Kansas City, during their annual shareholder meeting for highlighting the company's failure to keep their own workers safe from COVID-19 on the job.

"We deserve $15 and a union" pic.twitter.com/UTIMpvP0wY

All week, workers fought for what we need to survive this not just this crisis, but also the everyday crises we face living on poverty wages.

We’re not done – and we won’t be until McDonald’s pays us the wages and respect we deserve.

Sign the petition to stand in solidarity with striking workers!