Thousands of workers to carry on fight for higher pay, union rights 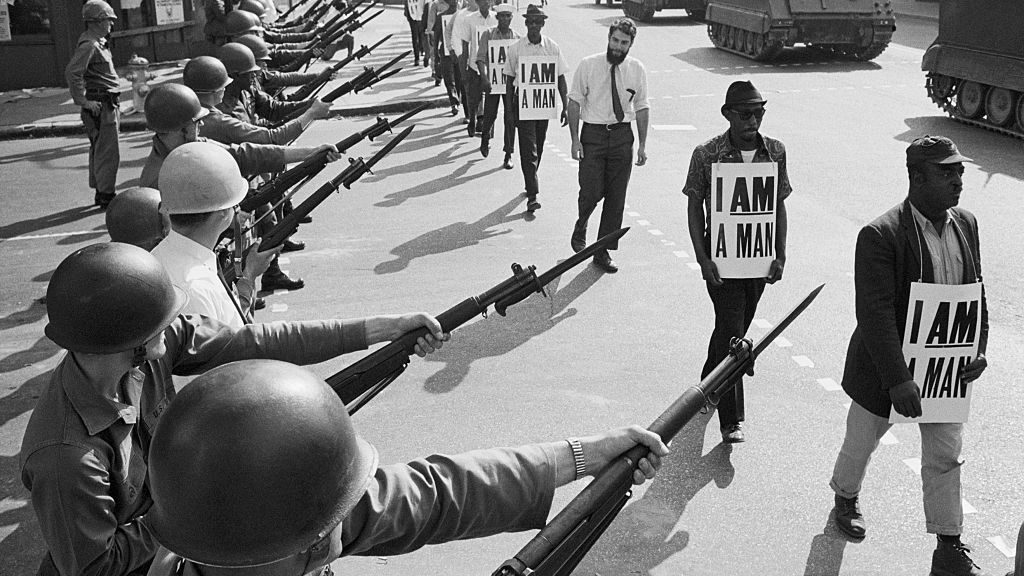 MEMPHIS—Thousands of fast-food cooks and cashiers announced Thursday they will walk off their jobs and protest nationwide Feb. 12 – the 50th anniversary of the historic Memphis sanitation strike – carrying on the fight for higher wages and union rights led by hundreds of black municipal workers whose 1968 walkout became a rallying cry of the Poor People’s Campaign led by Dr. Martin Luther King, Jr.

Workers in the Fight for $15 declared they will participate in six weeks of direct action and nonviolent civil disobedience beginning Mother’s Day as part of the new Poor People’s Campaign: A National Call for Moral Revival, uniting two of the nation’s most powerful social movements in a common fight for strong unions to lift people of all races out of poverty.

“Fast-food cooks and cashiers like me are fighting for higher pay and union rights, the same things striking sanitation workers fought for 50 years ago,” said Ashley Cathey, a 29-year-old Memphis fast-food worker.

“We’re not striking and marching just to commemorate what they did – we’re carrying their fight forward. And we won’t stop until everyone in this country can be paid $15 an hour and has the right to join a union.”

On Feb. 12, fast-food cooks and cashiers in two-dozen cities across the Mid-South will walk off their jobs, demanding $15 and union rights.

They’ll be joined by thousands of workers protesting in another two-dozen cities across the country, paying homage to the 1968 strikers and vowing to continue their fight, and showing support for the Mid-South strikers and the new Poor People’s Campaign.

The actions stretching from coast to coast on Feb. 12 will culminate in a 1,500-person march from Clayborn Temple to Memphis City Hall – the same route sanitation workers walked 50 years ago – led by strikers in the Fight for $15 from across the Mid-South; Memphis sanitation workers who participated in the 1968 strike; the Revs. Dr. William Barber II and Dr. Liz Theoharis, co-chairs of the Poor People’s Campaign: A National Call for Moral Revival; Mary Kay Henry, president of the Service Employees International Union; Coalition of Black Trade Unionists Founder Bill Lucy, who collaborated with Dr. King during the 1968 strike; and other national labor and civil rights leaders.

The workers’ strike announcement comes 50 years to the day after Memphis sanitation workers Echol Cole and Robert Walker were crushed to death by a faulty truck’s compactor, the catalyst for the strike that launched less than two weeks later.

“To truly defeat systemic racism, poverty, the war economy and ecological devastation, all working people must have the freedom to come together and harness their power collectively. Our movements are prepared to do whatever it takes — including taking to the streets and risking arrest through civil disobedience — to win the right to a living wage and a union for all.”

The Memphis sanitation strike began on Feb. 12, 1968, when hundreds of Black men went on strike for recognition of their union, a local of the American Federation of State, County and Municipal Employees, and demanded a raise to $2 an hour – the equivalent of $15.73 today after inflation. Strikers marched daily from Clayborn Temple to Memphis City Hall holding signs declaring, “I AM A MAN.”

“The 1968 sanitation strike was a groundbreaking moment for our country that showed the American people that labor rights, economic rights, human rights and civil rights are all inextricably linked,” said Lee Saunders, president of the American Federation of State, County and Municipal Employees.

“As we march forward in the footsteps of the brave sanitation workers who risked everything to fight for dignity and respect on the job, let’s do more than just remember them. Let’s continue their fight against poverty and prejudice in all its forms.”

Ahead of the strike and protests, the Fight for $15 launched a new website where visitors can create their own versions of the iconic “I AM A MAN” sign.

People visiting the site can enter their own descriptor in lieu of ‘MAN’ and share their customized sign on social media. Submissions will be turned into printed signs that workers will carry in Memphis on Feb. 12.

Hours before the march in Memphis, fast-food workers, workers who joined the 1968 sanitation strike, historians, and community leaders will participate in a symposium at the National Civil Rights Museum examining the legacy of the Memphis sanitation Strike, entitled “THE STRIKE NOW: 50 years from “I AM” to the Fight for $15.”

The Feb. 12 strikes and protests come as politicians have cut minimum wages and attacked unions across the country, disproportionately harming workers of color. Workers in predominantly Black cities including St. Louis, Mo., Kansas City, Mo., and Birmingham, Ala., have had minimum wage increases nullified by white state lawmakers in recent years.

Meanwhile, union jobs in state and local government – which have historically provided a pathway to the middle class for workers of color – have been under attack from corporate-backed politicians like Illinois Gov. Bruce Rauner, who has refused to bargain a contract with state employees for nearly two years to break their union.

And people of color remain over-represented in low-paying industries like fast-food: more than half of Black workers and nearly 60 percent of Latino workers are paid less than $15, according to an analysis by the National Employment Law Project.

“Now more than ever, working people need strong unions so they can fight back against racist politicians who work hand in hand with corporations to keep people of color locked in poverty,” said SEIU President Mary Kay Henry.

“Our union is proud to support workers in the Fight for $15 as they step up their fight as they fight to turn fast-food jobs into good, union jobs and take part in their biggest protests yet as part of the new Poor People’s Campaign.”

The Fight for $15 has built deep ties with civil rights groups and leaders over the past five years. U.S. Rep. John Lewis joined Atlanta fast-food workers on a strike line in August 2013, encouraging them to, “Keep walking, keep marching, keep talking, keep pushing.”

In the summer of 2014, the NAACP passed a resolution backing the Fight for $15; in the winter of 2015 Memphis sanitation workers who participated in the 1968 strike implored a gathering of fast-food workers at Dr. King’s church in Atlanta to keep fighting for $15 and union rights; and faith leaders of all stripes have echoed the workers’ moral argument for dignity on the job. Workers have developed deep ties with the Movement for Black Lives and marched alongside activists calling for racial justice from Ferguson, Mo. to Baton Rouge, La, to Milwaukee, Wisc.

In April 2017, workers in the Fight for $15 joined together with the Movement for Black Lives for a wave of “Fight Racism, Raise Pay” protests across the country. Members of the Memphis chapter of the Fight for $15 participated in the movement that led to the removal of Confederate monuments in the city late last year.