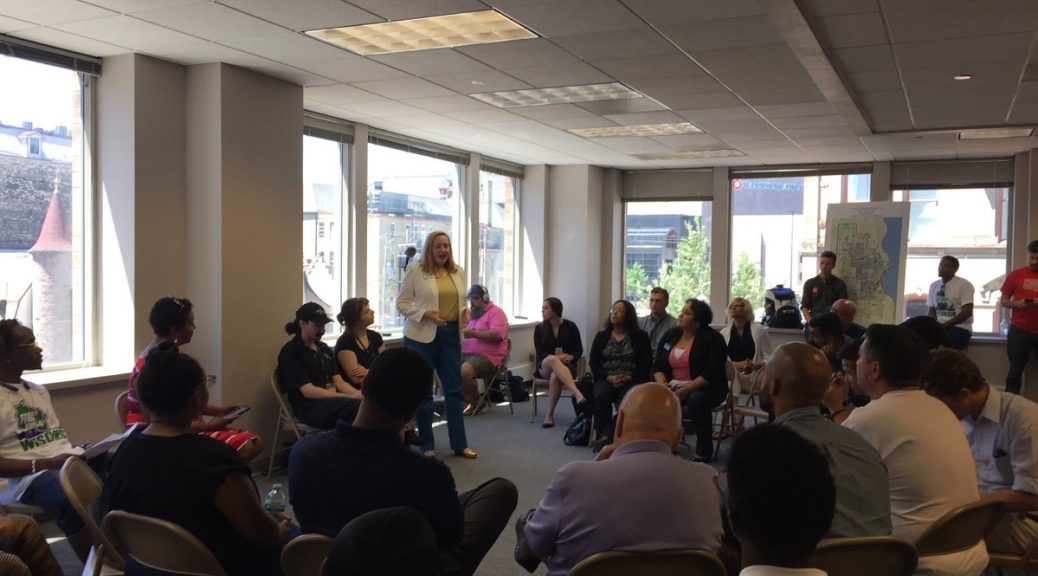 Workers joined elected officials and candidates at an America Needs Unions town hall yesterday in Milwaukee. After scoring an agreement with the Milwaukee Bucks arena to provide fair wages and a path to a union for 2,000 workers, they’re building on that momentum to bring good union jobs statewide.

ICYMI: Low-wage workers won an agreement with the new Milwaukee @Bucks arena where 2,000 workers will get $15 and a path to a union. We can do this all over the state. #fightfor15 #organizingworks pic.twitter.com/y5NdDJyRrf

The group agreed that there’s still work to be done in Milwaukee, where workers like Jonathan struggle to pay rent. Despite working overtime at McDonald’s, Jonathan is still forced to stay at shelters with his four kids.

“Parents like me are working full time jobs all over Wisconsin and still living in poverty. I work more than 40 hours at McDonalds. And I still couldn’t make it. I had to live in shelters with my kids” Jonathan Wallace, McDs worker #fightfor15 pic.twitter.com/4xVrRb52sa

“For years I walked to work and back home. I walked for my kids. That’s what kept me going. If we get this we all get this. It’s not about the money. It’s about all of us” Jonathan Wallace, McDs worker #fightfor15 pic.twitter.com/2EKCeOAt0b

Workers get stuck in the cycle of poverty living paycheck to paycheck, with no opportunity to save for the futures they dream of.

Milwaukee leaders doubled down on their vows to fight for workers rights and fair wages. “Wisconsin must do better and we will do better.”

This is the sobering & harsh reality of a low-wage economy. A low unemployment rates means nothing when families like Jonathan's are struggling just to make ends meet. If you work 40hrs/week you deserve to be paid a living wage. Wisconsin must do better and we will do better. https://t.co/DadeYscHG6

Gubernatorial Candidate Mahlon Mitchell reminded participants of everything unions have done for the American people, from workplace safety standards to anti-discrimination laws to the 40 hour work week.

Unions have “helped to build the largest middle class in history,” he said. “They help to balance out the power. Why do you think billionaires spend so much money trying to destroy unions?”

“The reason unions are necessary because they helped to build the largest middle class in history. They help to balance out the power. Why do you think billionaires spend so much money trying to destroy unions?” @MahlonMitchell #Fightfor15 pic.twitter.com/2mgrFFsQPS

Randy Bryce, an ironworker and candidate for U.S. Representative (WI-01), praised unions as a model of democracy in the workplace: “Unions are about looking out for each other. Every workplace needs one.”

“Unions are democracy in the workplace. Unions are about looking out for each other. Every workplace needs one” @IronStache #fightfor15 pic.twitter.com/hMs7ztn34V

And Gubernatorial Candidate Kelda Roys called on the state of Wisconsin to lead the fight for fair wages and union rights.

“Wisconsin needs to be the leader in the fight for working people. We need to make sure working people have living wages, paid leave, pensions” @keldahelenroys #fightfor15 pic.twitter.com/XZ6RJTUEUs

Thanks so much to everyone who came out to the "Wisconsin Needs Unions" event today! Every worker deserves the right to bargain for better wages, benefits, and working conditions, and every Wisconsinite deserves a family supporting wage of at least $15 an hour. #FightFor15 pic.twitter.com/C6a3HxBeyD

Watch the full video of the Milwaukee Town Hall here:

Live: Workers from the Fight for 15 and community supporters meet with candidates and elected officials to tell it like it is. We are looking for leaders who will fight for us to have the raises and unions Wisconsin needs.