US Labor Secretary Tom Perez Stands With The Fight For $15 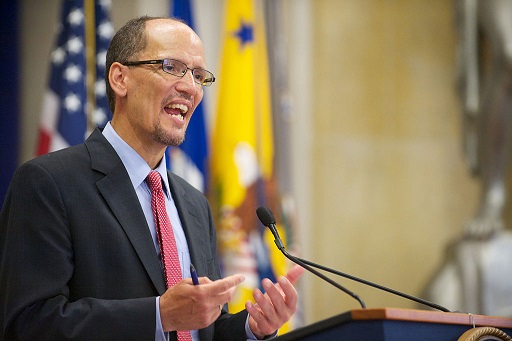 Labor Secretary Tom Perez traveled to Detroit on Tuesday to show his solidarity with the Fight for $15.

“I’m proud to stand with the Fight for $15 movement,” Perez said. “And it really is a movement. It’s for shared prosperity.”

Perez met with Detroit workers from various fast-food chains as well as officials from the local branch of the AFL-CIO labor federation.

“People are increasingly understanding that they’re taking it on the chin at work,” Perez said. “If you battle your boss alone, it’s a heck of a lot harder to succeed. But when you work in concert with fellow workers, not just in your workplace but across sectors, that’s how you succeed.”

When Mya’s son is older she’ll be able to tell him she was part of a movement. A movement to give him a better life. pic.twitter.com/Y4ldNWdRsz