VIDEO: Massive Global Protests on 4/14 Because McJobs Cost Us All 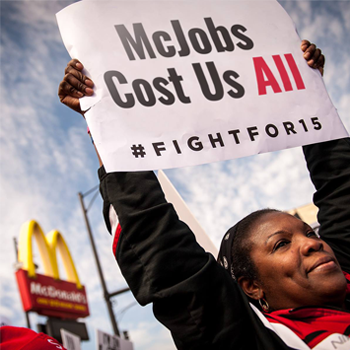 April 14 was a momentous day. Coming off of the biggest month in Fight for $15 history, with New York State and California officially moving to $15 an hour, and 10 million minimum wage workers getting BIG raises to $15 across the country, the Fight for $15 made one thing clear. WE WON’T STOP UNTIL WE HAVE $15 EVERYWHERE.

Thousands of workers hit the streets, from Pittsburgh to New York, LA to Paris, Bangladesh to Miami. This movement is strong, relentless, and unstoppable. And we’re winning.

That evening, at the Democratic presidential debate, the strength of this movement was never clearer as both candidates’ support for the Fight for $15 was stronger than ever. We have literally changed the debate on wages because we join together, because we strike, and because we just won’t stop.

And we’ll keep on fighting until EVERY one of the nearly 64 million Americans struggling to get by win $15 an hour and union rights. Watch and share how the day went: