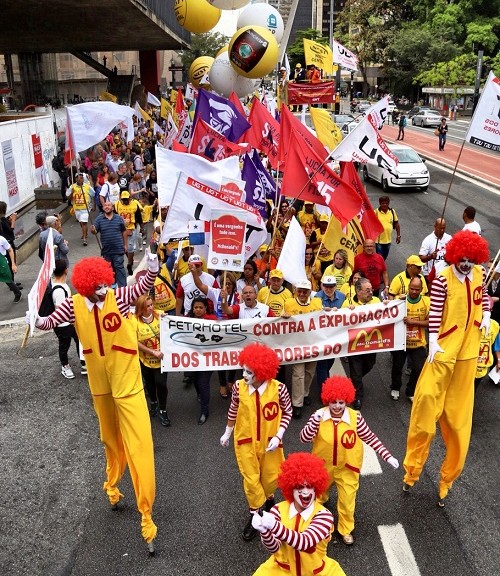 The Brazilian Federal Senate will hold an unprecedented hearing Thursday on McDonald’s role in driving a global race to the bottom, placing the fast-food giant under the microscope in one of its most important markets overseas, and marking a major escalation of the global effort to hold McDonald’s accountable for its mistreatment of workers and bad corporate citizenship.

Workers from five continents, elected officials, and labor leaders from around the world will deliver in-depth testimony on how McDonald’s business model is harming workers, consumers, governments, suppliers, and competitors.

A series of related actions and protests throughout Brazil kicked off Monday afternoon, including a global roundtable with McDonald’s workers and a massive protest at São Paulo’s downtown McDonald’s location.

McDonald’s is coming under increased scrutiny for both its treatment of workers and its questionable corporate citizenship around the world. In Brazil, a coalition of trade unions has filed two lawsuits accusing the company of widespread and systematic labor and health and safety violations. One of the suits accuses McDonald’s of “social dumping,” an anti-competitive practice that drives standards down for workers across the country, and seeks to prevent the company from opening new stores unless it complies with Brazilian law.  Also, McDonald’s agent in Latin America and the Caribbean, Arcos Dorados, has come under scrutiny, with an investor group asking the New York Stock Exchange to review the company’s corporate governance.