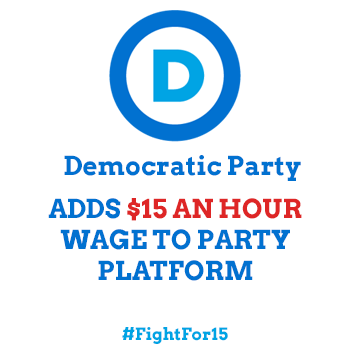 In yet another monumental win for the Fight for $15, the Democratic party announced that they’ve added support for $15 an hour pay to their official party platform. One of the most important institutions in American politics has thrown its weight behind a $15 national minimum wage. We just keep winning.

Terrence Wise, a Kansas City, Mo. McDonald’s and Burger King worker and member of the National Organizing Committee of the Fight for $15, said it best:

“The Democratic Party’s move shows a growing understanding that $15 an hour is what American workers everywhere need to survive and support their families. When fast-food workers first went on strike in New York City, most people gave them no shot to win. But the movement caught on in every corner of the country and big wage increases are now spreading from coast to coast. By joining together, speaking out and going on strike, we’re changing the politics of the country. More than 10 million workers are already on their way to $15 and we’re going to keep on fighting until every underpaid worker in this country wins $15 and union rights.”

The fight is far from over, but statewide victories in New York and California, along with citywide victories across the country in places like Seattle and Pittsburgh, have kept the fight growing, and we won’t stop until we win $15 an hour and union rights EVERYWHERE.