YES! I’m ready to join millions of Americans to build a better future for everyone who works. I pledge to vote for candidates who support the Fight for $15 Voter Agenda in 2016: 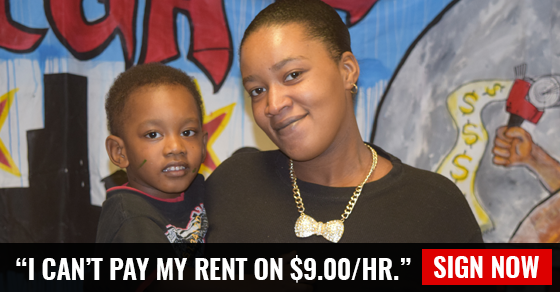 Join the movement to build a better future for our families.

Right now, over 64 million people work at jobs paying poverty-level wages. That drags down wages for everyone who works while making a handful of CEOs very rich.

Hardworking Americans need a raise to a wage that really pays the bills and the right to stick together in a union. That will increase incomes and allow us to spend more in our communities, fueling our economy.

We need elected officials who will listen to everyday working moms and dads, not just CEOs and billionaires. In the 2016 elections, we can make that happen by fighting for our movement’s agenda and speaking up with our votes.

We’re already winning. We’ve won $15 an hour in California and New York and huge raises in cities from Seattle to Chicago. 17 million Americans have won raises since the Fight for $15 began three years ago.