Not Our Labor Secretary: Fight for $15 Actions to Stop Andy Puzder! 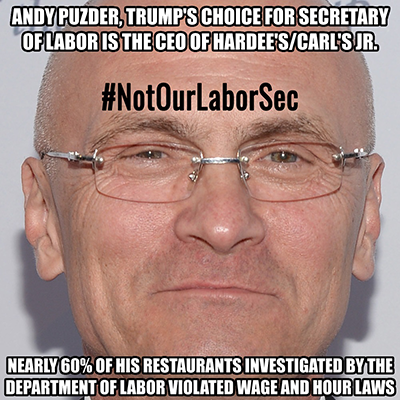 Instead of taking on the rigged economy, it seems like Donald Trump wants to rig it up even more. By picking Andrew Puzder for labor secretary, Trump made it pretty clear – the next four years are going to be about low pay, wage theft, sexual harassment, and racial discrimination.

Puzder, CEO of Hardee’s and Carl’s Jr., is paid more in one day than many of his employees make in a year— and that’s the way he wants to keep it.

Trump wants to put Puzder in charge of enforcing these very laws that he broke as CEO. He opposes the minimum wage. He thinks workers are overprotected. He is against unions. He even said he wants to fire workers and replace them with machines that can’t take vacations or sue their employers when they break the law. In fact, as a fast-food CEO, he regularly broke the laws he’d be responsible for enforcing if he gets the job.

Puzder is the wrong choice for labor secretary. He is simply unfit to be put in charge protecting our nation’s workers and we’re calling on Members of the Senate to reject the nomination of Andy Puzder to lead the Department of Labor.

On Thursday, January 12, we’re taking the Fight for $15 straight to Puzder’s door – with protests at Carl’s Jr, Hardee’s, and other restaurants he runs from coast-to-coast.

Stand with the #FightFor15. Tell the Senate to oppose Andy Puzder for Labor Secretary.

And one thing is for sure whether his nomination is confirmed, denied, or withdrawn: we won’t back down for one minute in our demands for $15 an hour and union rights for all workers.