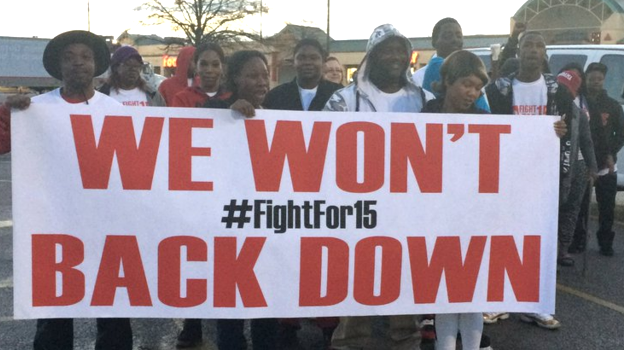 In 2016, workers in Birmingham fought to win a minimum wage increase from $7.25 to $10.10 — but soon after, the Alabama Legislature rushed through a “preemption” bill that stopped that increase from going into effect.

Black workers in the Fight for $15 sued, claiming the bill discriminated on the basis of race and violated the Constitution’s equal protection clause. They argued the bill — pushed through by white legislators in the majority white Alabama Legislature — disproportionately hurt Black workers in a city where 74% of residents are Black.

On Wednesday, the 11th Circuit court of appeals reversed a decision dismissing the case, allowing the suit to move forward, and giving Black workers and the Fight for $15 the opportunity to prove that the preemption law was motivated by racial discrimination. The opinion of the court read, “Today, racism is no longer pledged from the portico of the capitol or exclaimed from the floor of the constitutional convention; it hides, abashed, cloaked beneath ostensibly neutral laws and legitimate bases, steering government power toward no less invidious ends.”

The decision marks an important victory in the fight against preemption laws and towards getting justice for Black and Brown workers in Birmingham.

Antoin Adams Explains the Fight for A Fair Wage in Alabama

Today, the 11th Circuit Court of Appeals ruled to overturn a lower court's dismissal of a suit charging Alabama discriminated against workers and Birmingham when white legislators blocked their minimum wage increase. #FightFor15 worker Antoin explains the struggle in this video.