We strike because it works! Check out some of our recent wins.

McDonald’s thinks we’re disposable – so it’s up to us to stand up for our lives, the lives of our communities, and for what’s right.

All over the country, Fight for $15 workers have been walking off the job – and winning. When we stand up together we can’t be ignored.

Los Angeles
After a Domino’s worker was hospitalized with COVID-19, workers went on strike demanding paid sick leave and a thorough deep cleaning of the store — and that’s exactly what they got.

After 3 weeks on strike, on May 1st we felt safe enough to return to work at @dominos in LA 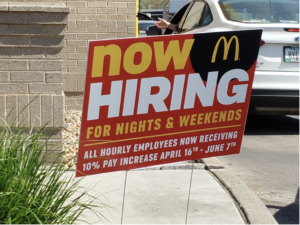 San Francisco
At a McDonald’s, workers say they weren’t being paid if they were forced to quarantine and that managers told them to wear COFFEE FILTERS as face masks. After going on strike, all hourly workers won “thank you pay” increasing their wages.

BREAKING: McDonald's workers are ON STRIKE at 1100 Fillmore Street in San Francisco after four co-workers tested positive for #covid19.

Chicago
McDonald’s workers and allies held a protest caravan from their cars demanding masks and gloves. McDonald’s gave in after just ONE day.


Every hour of hazard pay, every bottle of hand sanitizer or box of facemasks, and every store deep clean is a victory: for us, for our families, and for our communities. That’s why we strike, and why we won’t back down.

Add your name to stand with us as we strike for what we need to survive.